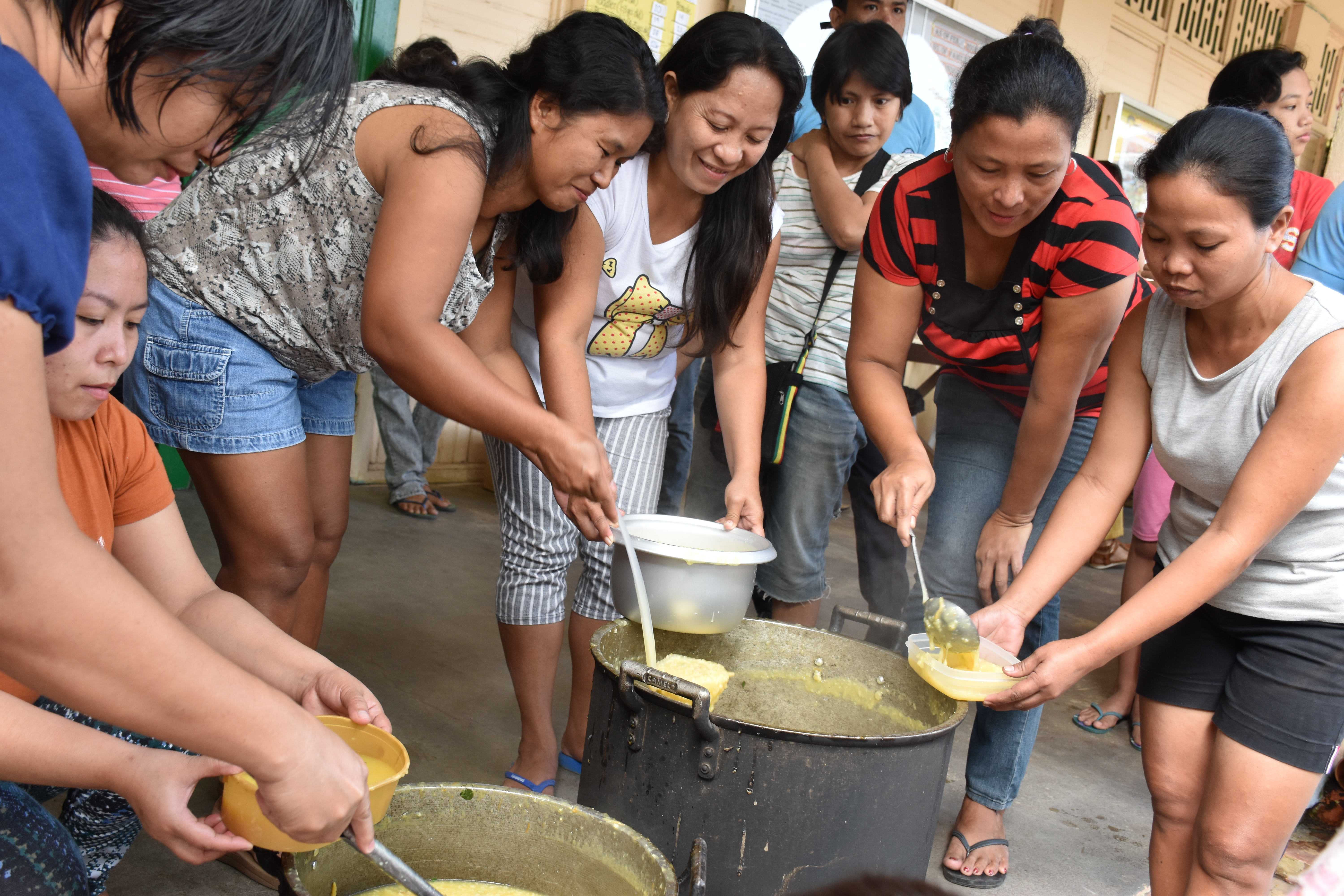 Beneficiaries of Pantawid Pamilyang Pilipino Program (4Ps) of Department of Social Welfare and Development (DSWD) in Bicol help feed the affected families of Mayon Volcano eruption through their community garden.

From their bountiful harvest of fresh vegetables and crops these 4Ps beneficiaries of Barangay Calzada, Guinobatan, Albay provided a sumptuous meal to a total of 542 affected families temporarily housed in Guinobatan West Central School.

According to Charmaine Gadgode, municipal link deployed to provide the current status of affected families in the evacuation center, although they (beneficiaries) are evacuees as well, they opted to return the blessings they received through helping their co-residents.

“The money they spent to provide the meals come from the produced vegetables and root crops in their community garden located at the said barangay. Plus, the remaining money of P4,000.00 that the group has from joining the last year’s competition of Albay Family Based Food Production program organized by the Provincial Government of Albay,” Gadgode said.

Pride of the accomplishment of the group, she added it was last August 2017 that beneficiaries thought of joining the competition. “They won first place at the Municipal level and fifth place at the Provincial Level Competition with P8,000.00 as their cash prize,” Gadgode said.

Michelle Odono Cabellero, beneficiary and parent leader said that as a beneficiary of the Program they were urged and thought on how to plant vegetables, fruits and herbs from their own backyard using the Bio-intensive gardening (BIG) technique—which uses organic fertilizer to grow vegetables.

Ginna Basquilos, 37, of Barangay Masarawag, an evacuee who fled from the eruption of Mayon Volcano together with his two kids and her mother, expressed his gratitude to the kindness of beneficiaries. “Salamat, naisip ninda na magtabang man samo. Masiramon su pagkakan mi ta fresh su gulay, tapos dakol sahog, [Thank you, they thought of helping us. The food was delicious because the vegetables are fresh and it has a lot of ingredients],” Ginna said.

According to Regional Director Arnel B. Garcia, the Project BIG encourages 4Ps beneficiaries from rural, or even in urban areas to plant vegetables in small pots of lands and even in pots. “In this way beneficiaries are becoming empowered to provide for themselves and their families through their own efforts. Enabling them to learn to fight poverty and become more conscious of improving their nutrition habit,” he said.

Also, he noted that BIG may seem like a simple project. “But it goes a long way towards eradicating hunger and providing food security among our beneficiaries. It is an effective strategy towards reducing the impact of poverty on families,” he added.

At present, Project BIG has saturated all the 114 Municipalities in Bicol Region with a total of 327,087 pantawid pamilya household beneficiaries who has their own backyard garden or container gardens at their home.

In addition, through the collective efforts of 4Ps beneficiaries in whole Region, they are able establish 10,471 communal gardens located in their respective barangay and 7,560 communal gardens found inside the school.

Michelle stated that it was through the efforts of the Barangay Council, women’s organization and farmer’s association, Bicol University College of Agriculture and Forestry (BUCAF), together with the 4Ps beneficiaries that they were able to put their communal garden.

She added that everyone selflessly shared their plants, and BUCAF provided them with variety of seedlings to plant.

Since last year until now, BUCAF continuously conduct a two-hour weekly session, to beneficiaries and trained them on how to properly cultivate land, plant various kinds of vegetables and produce organic fertilizers from animal wastes, or dried plants.

With the help of Department of Agriculture, they (beneficiaries) were also provided with farm tools such as trowel and fork.

However, due to the continuous activity of Mayon Volcano spewing thick pillar of smoke and ashes some of their plants and fruits are burned and damaged.

“Wala din kaming bakod kaya may mga kambing tapos iba pang hayop na kikaon su pananom, [We do not have a fence around that is why the goats and other animals owned by my co-villagers ate our plants],” she explained.

Amid the Mayon volcano’s continued eruption, beneficiaries continue to produce vegetables and fruits from their garden ang generate income.

Last September 2017, they are able to harvest 15 kilos of mustard, cabbage and other crops earning more than 1,000.00 from their produce. “Ginagamit namon po sa pagmantenir nin garden [We used our earnings to maintain our garden],” she stated.

Some of the villagers are free to harvest in the communal garden so long as they ask permission to the person in charge.

“Pwede po sinda na magkua nin gulay o ano man na pananom didi lalo na po su mga nanganaipo na warang mailuto [They can get vegetables or any kind of plants especially those persons who do not have anything to cook],” Michelle said.

Michelle, being one of the active beneficiary who maintain their communal garden said it offers many benefits such as stress relief, helps building her self-esteem and fights depression.

The communal garden provided these beneficiaries an opportunity to enjoy nutritious food at little cost or no cost. It has provided the opportunity for people from different backgrounds to come together and foster a sense of ownership, selfless service and undertaking their social responsibility in their community. ***GLindio, IO-4Ps