Former grantee of DSWD and CHED now a teacher 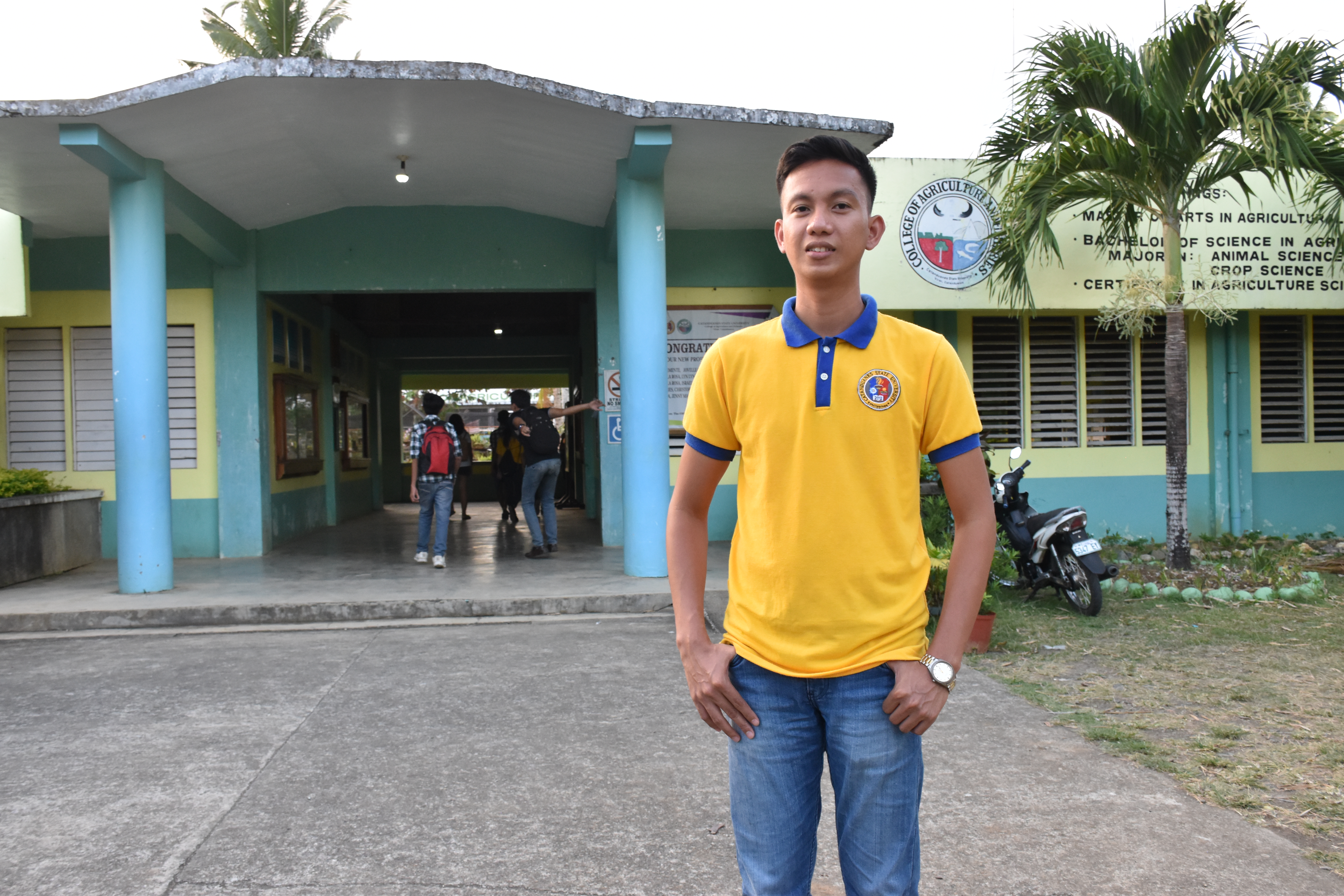 Unlike any other students who have their parents support during college years, Joseph Tobias, 24, has to work on his own having left by his parents at an early age.

Joseph and eight of his siblings were left by their parents at an early age. He was 16 years old when his father died due to heart attack and two years after his mother died due to congestive heart failure.

Four of his elder siblings were forced to stop education to work. While Joseph committed a promise to finish until college.

“Sabi ko ayoko mahinto sa pag-aaral, humingi ako ng tulong sa mga kapatid ko. Sinabi ko sakanila na pag-nakapagtapos ako, sila naman ang papag-aralin ko, [I told them I do not want to stop my studies, I asked help from them and told them that after I finished college I will send them to school],” he said.

During high school until college years, it was through the remittances of his elder siblings that he was able to finance his studies and through vending “kakanin” native foods made by his eldest sister–Ma. Josalie, 30.

According to him, there was a time that it was close to impossible that he would graduate in college.

“Mahirap na walang magulang na masasandalan. Ako kasama ng mga maliliit ko na kapatid ay kailangan na gumising ng 4:00AM para magbenta ng kakanin at sinisikap namin maubos iyon para makatulong sa kapatid ko, para may makain kami at makapasok sa paaralan, [It was hard for us having no parents that we could lean on to. I and my younger siblings have to wake up as early as 4:00AM to sell kakanin to our neighbors. Oftentimes, we came late in school because we wanted to sell as much as we can to help my sister earn for us to have food on the table, and be able to go to school],” he said.

However, after a year in college, Joseph has to stop and work as a security guard in Metro Manila to support his younger siblings education and be able to save money to continue his college studies.

“Yung sahod ng mga kapatid ko ay kaunti lang. Tama lang sa pagbili ng pagkain, tuition fee ng mga kapatid ko sa elementary at high school at sa school projects nila. Gusto ko silang tulungan kaya yung sahod ko napupunta sa kanila at nagtatabi lang ako sa pangaraw-araw ko na gastos, [My siblings income were very minimal. It is only sufficient to buy our food, tuition fee of my younger siblings in high school and elementary and school projects. I wanted to help them so all of my salary were sent to them and I only save a few for my daily expenses],” he stated.

But, his hopes of earning a degree still remained. Joseph save his last earning and went back to his hometown in Barangay Comagaycay, San Andres, Catanduanes. He continued his studies in Catanduanes State University with a course of Bachelor of Science in Agriculture.

To continue and be able to finance his education, he was helped by one of the faculty members providing him a small sleeping quarter in school to save money from commuting from home. He also asked for a part-time job as a janitor where he used to wake up 4:00 AM to clean the school’s comfort rooms, hallways, and classrooms.

“Yung panahon na iyon, masasabi ko na maswerte ako at may mga tumutulong sa akin, [That time, I can say I am still lucky that people helped me],” he said.

It was not an easy road for Joseph having to work before going to class, and thinking where to get money for his school projects.  Until, on his third year, he was lucky to become a grantee of Expanded Student Grant-in-Aid Program for Poverty Alleviation (ESGP-PA) being implemented by Commission on Higher Education in partnership with Department of Social Welfare and Development Pantawid Pamilyang Pilipino Program.

Under the program, a student-grantee is entitled to a maximum grant of P60,000 per school year or P30,000 per semester for tuition and other school fees, textbooks or other learning materials, and stipend.

He said, being a grantee gave him strength and hope to pursue and get the degree he wanted. “Sobrang nakatulong iyon sa aming pamilya. Ang ginawa ko, nagtatabi ako para mabigyan ng pangklase mga kapatid ko. Tapos ang tuition fee ko secure na. Nung nagthesis ako malaki ang naitulong sa akin, [It’s a huge help to my family. What I did, I allocate some for the studies of my siblings. My tuition fee was secured. When we are doing our thesis, it is a big help],” he said.

According to Joseph, when he finally made it through the graduation, he could not stop crying because all that he had gone through was all worth it. He graduated with Academic Distinction and the degree he dreamt off.”Umiiyak pa rin ako hanggang ngayon pagna-aalala ko nung nasa stage ako para kunin ang diploma ko. Ang diploma ko ay para sa mga kapatid ko na nariyan para sa akin, sa mga magulang ko at sa lahat ng tumulong sa aming pamilya, [I am still crying until now every time I recalled the moment I was in the stage to get my diploma. My diploma is for my siblings who have been there for me, for my parents and to everyone who lends help to our family],” he said in teary eyes.

At present, Joseph is currently employed as a faculty teacher in the same school, working and earning to support his siblings.

He is also fulfilling his promise to his siblings providing support for their college education and the rest to continue to enter school.

“Ako ang unang nagkakapagtapos sa pamilya o sa aming clan. Pangarap namin na magkakapatid na makapagtapos kami lahat at balang araw ay ma-aabot namin ang pangarap ng aming mga magulang–na makapagtapos kami, may magandang trabaho, magkaroon ng maganda at masayang pamilya, [I am the first to graduate in college in our family or in our clan. We all dreamt to finish our education and in the future and be able to achieve the dream of our parents–to finish our education, to have a good job and to have a beautiful and happy family],” he said.

him saying that “If we were able to make it, surely you can as well. As my parents usually said to us, those people who have a good education are those who have a better future].”***GLindio,4Ps-Information Officer