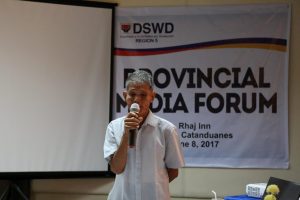 Pedro Cabrera, a DSWD Kalahi-CIDSS elderly volunteer of Pandan, Catanduanes, narrates his personal story on how he led a group of residents to complete the construction of their drainage during the media forum held at Virac last June 8, 201

Virac, Catanduanes – One of the oldest community volunteers of DSWD Kalahi-CIDSS shared his challenges and experiences during the completion of a sub-project in his barangay during the media forum here last June 8, 2017.

Pedro Cabrera, 78, of Brgy. Maculiw, Panganiban, Catanduanes is a volunteer who helped his barangay to construct a drainage system together with other volunteers in his area.

“Napakalaking tulong po ng DSWD Kalahi-CIDSS sa pagpagawa ng drainage system sa aming barangay; kaya nagpapasalamat po kami at natupad ang aming pangangailan (DSWD-Kalahi CIDSS is a big help in the construction of drainage system in our barangay, so we are really grateful that our need has been addressed),” said Cabrera during the media forum as he gave a short testimonial on the Kalahi-CIDSS project

Despite his age, he added that it is never a hindrance to heed the call of the needs of his community.

Arwin O. Razo, Assistant Regional Director for Operations, urged the media to help the agency in reaching more people and be an agent of change in the dissemination of information of the agency’s services to the poor, vulnerable and disadvantaged.

“We need you as our partners in receiving complaints and grievances lodged by the public when it comes to our services for the improvement and enhancement of our system,” Razo told the media.

Further, Emily Mendoza, Provincial Action Team (PAT) leader, presented the accomplishments of the agency for 2016 and first quarter of 2017. It was followed by an open forum between the media-participants and DSWD officials.

The media forum was conducted in the island-province aiming to inform the public on its programs, projects and regular services through the help of DSWD media-partners.

Meanwhile, the agency will be conducting media fora in the provinces of Masbate, Camarines Sur, Sorsogon, Camarines Norte and Albay in July and August, 2017. 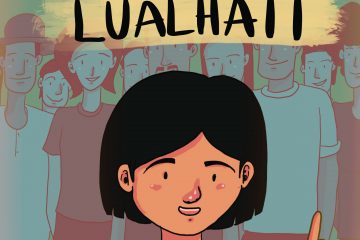 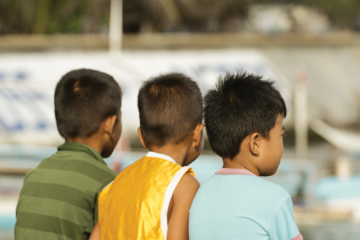 Read the various stories of community and personal development of the Bicolanos and the role of Kalahi-CIDSS in sparking “burunyog” or unity in the communities. Download this compendium through the link provided below: DSWD Kalahi-CIDSS Read more…