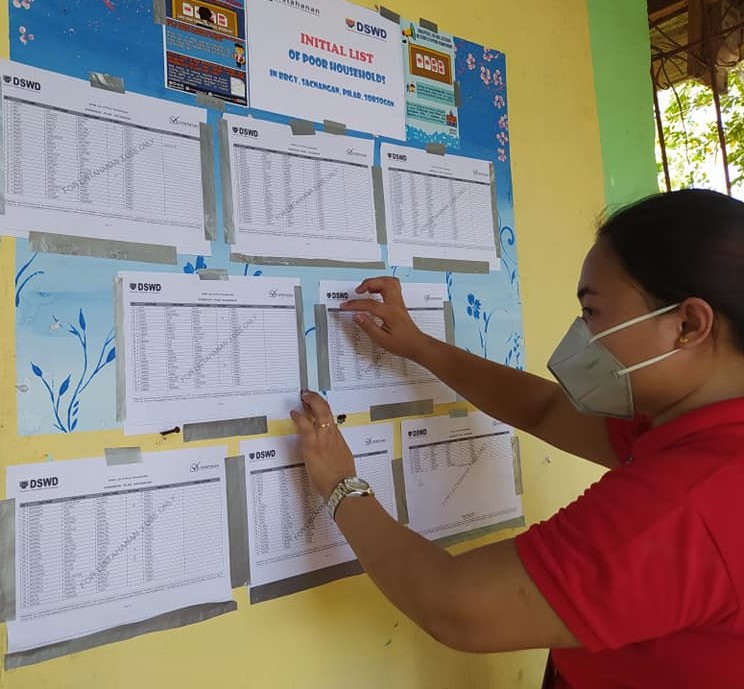 Legazpi City – The Department of Social Welfare and Development (DSWD) Field Office V urges the public to take part in the validation phase by checking the initial list of poor households posted in their respective barangays.

DSWD Regional Director Arnel Garcia announced that the agency has started posting this week, the initial list of poor households in the provinces of Albay, Camarines Sur, Camarines Norte, and Sorsogon.

According to Director Garcia, the validation activity provides an opportunity for the community to review and make corrections on their household information. Households not visited may appeal to be interviewed. He further said that the list is an initial result and may change after the validation.

For this validation, the community can send their appeals or inquiries via online through the Listahanan website at https://listahanan.dswd.gov.ph/grievance or community desks in the barangays.

The Listahanan Area Supervisors will receive and process grievances from the community per given schedule of each barangay. Likewise, the schedule for online filing will be the same as that of the community desks. Grievances filed beyond the set timeline in a specific barangay shall no longer be processed.

The created Barangay Verification Team (BVT) at the barangay level and the Local Verification Committee (LVC) at the City/Municipal Level will ensure that all appeals or grievances received in their localities are resolved on time.

The grievances or inquiries that may be filed are the following:

Meanwhile, once all grievances are consolidated and resolved, the assigned enumerator will make unannounced home visits and interview the households. After which, data entry into the system shall follow and then the generation of the final list of poor households.

Director Garcia added that in filing a grievance, the complainant must present any valid government ID to make the complaint valid. However, grievances sent through email, text, or social media will not be processed.

Listahanan is the DSWD’s information management system that aims to establish a database of poor households that will become beneficiaries of social protection programs. The list is being updated every four (4) years consistent with Executive Order 867.#crbarrameda