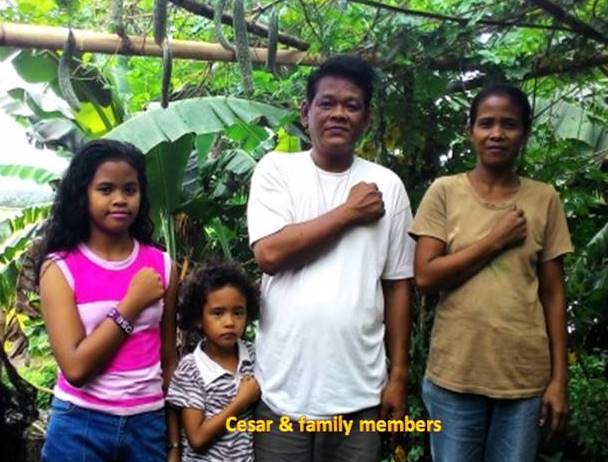 There are many people who need help, but to Cesar B. Caido, an Agta-Cimaron of Barangay San Rafael, Buhi, Camarines Sur, despite having less in life, he still manages to lend a hand to his villagers.

Brother Cesar as he is fondly called-off by his co-villagers, is one among the 366, 778 households in Bicol benefitting from Pantawid Pamilyang Pilipino Program being implemented under the Department of Social Welfare and Development.

Pantawid Pamilyang Pilipino Program is a human development measure of the national government that provides conditional cash grants to poorest of the poor, to improve the health, nutrition, and the education of children aged 0-18. It is patterned after the Conditional Cash Transfer (CCT) schemes in Latin American and African countries, which have lifted millions of people around the world from poverty.

Under the program, a beneficiary family with three children received a cash assistance of P500 for health, and P300 for education of child in elementary or P500 for child in high school.

Being the bread winner of the family, feeding 8 children, Brother Cesar’s earning is only enough to provide decent meals on the table. “Motorcycle driver po ako, at kahit ano pong

pwedeng pagkakitaan, ginagawa ko po basta sa mabuting paraan [I am only a motorcycle driver and I will do everything to earn as long as it is a decent one],” he said.

In addition to his income, he sells vegetables in the market.”Pinaga-lakaw mi po ang bukid nin duwang kilometro distansya para maka-kua kami nin gulayon na ititinda [We walked 2 kilometers distance in going to the mountains to get vegetables to sell],” he added.

But, as to Cesar being in need does not hinders his noble endeavour of caring for his needy barangay folks.

Cesar still remembers a woman who seeks his help having no decent job to support her children. “Siya po ay prostitute, at halos 10 lalaki po ang gumamit sakanya kada araw. Naging sakitin po siya at nagkaroon ng skin problem kaya na-awa po ako at tinulungan ko siya [She is a prostitute and almost 10 men used him, Everyday. He became sickly and acquire skin problem so I pity and help her],” he stated.

Since Brother Cesar has knowledge in using herbal medicines, and known as a pastor in the community, he provided medicinal herbs to cure the woman’s bruises, gave advice and did counselling to lead her to the right path.

“Binigyan namin siya ng P500 pampuhunan niya para pambili ng saging at gawing banana-q, turon, at iba pa para kumita. Tinuruan din namin siyang mapalago iyon hanggang sa napakain na niya ang mga anak niya sa tamang paraan [We gave her P500 to serve as capital to buy banana in order to make banana-q, turon and other native food delicacies for her to earn. We also taught her on how to sustain and increase her income to eventually be able to feed her children through having a decent job],” Brother Cesar proudly shared.

He added that as of present, the woman never goes back from her old activities and she is happily living with her children and husband in Manila.

Continuing his endeavour to help

Currently, Brother Cesar is a Barangay Human Rights and Action Officer President since 2010. He is also a Lupon member who performs his responsibility well and strongly advocates the rights of the individuals. He gives advice and fairly takes the sides of both parties whenever there are emerging issues and problems in the community.

More so, he organizes a group of pantawid pamilya beneficiaries to regularly conduct a monthly clean-up drive in their barangay calling it as Rabus Organization. He also plans to introduce this kind of initiatives to other neighbouring barangays.

According to him, truly Pantawid Pamilya helped him and his family to improve their living and made a big impact in influencing him to become a better father to his family, a husband to his wife Nora, 41, a volunteer and concerned citizen. “Ang Pantawid ay nagbigay sa amin ng pag-asa na makatapos ng pag-aaral ang mga anak ko at madaming naituturo na maganda para sa moral, naa-apply ko ang mga nalalaman ko para makatulong pa sa bawat pamilya [Pantawid Pamilya gives us hope to let our children finish their education and it taught us good moral values that enables me to apply to help every family],” Brother Cesar said.

He added that he dreamt of having a long life together with his wife to help more people, and see his children successful. “At sana makita natin ang totoong rason ng buhay, pahalagan ito at gamiting sa mabuti para makatulong sa kapwa [And I hope we would able to see the true reason of living and put importance and use it for good to help others],” he ended.***with report from Mary Grace C. Ojeda, Municipal Link-Pantawid