Listahanan validation in Bicol draws to a close 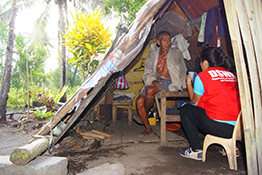 The Validation and Finalization activity of the Department of Social Welfare and Development Bicol under the Listahanan are about to end this February.

According to DSWD Regional Director Arnel Garcia, a total of 213, 586 complaints was received by the department as a result of the posting of the initial list of poor to each barangays.

These complaints include those households claim that they are poor and should be included in the list, certain household should not be on the list, household have not been visited by an enumerator, complaints for the incorrectly data entry in the family assessment form (FAF) and claim that the list is incomplete and not represents the actual poor household in the community.

Garcia said that of those complaints, 197, 902 or 93 % were already resolved through the conduct of the assessment and re-assessment.

“We target to complete the validation last December however due to typhoon Nona that hit the Bicol region, our operations were affected that’s why we extended until February,” explained Garcia

Moreover, the information gathered by the enumerators are being encoded in the database for Proxy Means Test (PMT) processing.
Proxy Means Test (PMT) is a statistical model that approximates family income based on observable and verifiable proxy indicators of the family’s income such as materials used in the housing structure, family’s access to basic services and facilities like water and electricity, and ownership of specific assets, among others.

It can be recalled that DSWD Bicol completed the household assessment last September 2015 which resulted in the identification of the 410, 186 initial poor out of 1,056,722 assessed households region-wide.

Listahanan, also known as the National Household Targeting System for Poverty Reduction (NHTS-PR) is an information management system that identifies who and where the poor are nationwide through family assessments. This system makes available to National Government Agencies (NGAs) and other social protection stakeholders a database of poor families as a basis for identifying potential beneficiaries of their social protection programs and services. ###