Sec. Bautista went to Tagas, Daraga, Albay last Saturday morning to distribute the relief goods. Daraga was under state of calamity due to Dengue outbreak with 361 cases in its 48 villages.

He went to Brgy. Tagas, Daraga, Albay last Saturday morning to distribute the goods to FFW beneficiaries who were part of the Simultaneous Clean-up Drive in Daraga. Sec. Bautista also engaged in the said clean-up with the residents and local officials. He was also joined by DSWD Usec. Danilo Pamonag and Fernando Trinidad of the Armed Forces of the Philippines (AFP) with Col. Nap Peñafiel who was heartily welcomed by Daraga Mayor Victory Perete and his party.

According to Sec. Bautista, he wanted to help the Department of Health (DOH) in its fight to end Dengue through the FFW which is the first time to be implemented in Bicol region and in the country.

“This initiative which was started by Bicol is considered as a model that I will recommend to be adopted by other DSWD regional offices as our response to the rising cases of Dengue in the country,” he added.

The DSWD Region V provided a total of 1,000 family food packs with a total cost of P390,000.00 under its FFW in response to the request of the local government unit (LGU) of Daraga as part of their Emergency Response Contingency Plan through a clean-up drive on Dengue Outbreak that covers 361 families from 48 barangays which started last August 15, 2019 and will continue until October 3, 2019. Each family who participated in the Clean-up Drive will receive two (2) family food packs.

Daraga was under the state of calamity due to dengue outbreak. Based on the DOH data from January to August 24, 2019, Daraga has 343 dengue cases and deaths, considered the greatest number all over the towns and cities in the province of Albay.

The FFW is a temporary intervention implemented during disasters that provides food to individuals in exchange for rendering community work such as declogging of canals, maintaining the cleanliness of evacuation centers, and removing of debris on roads and highways, among others. 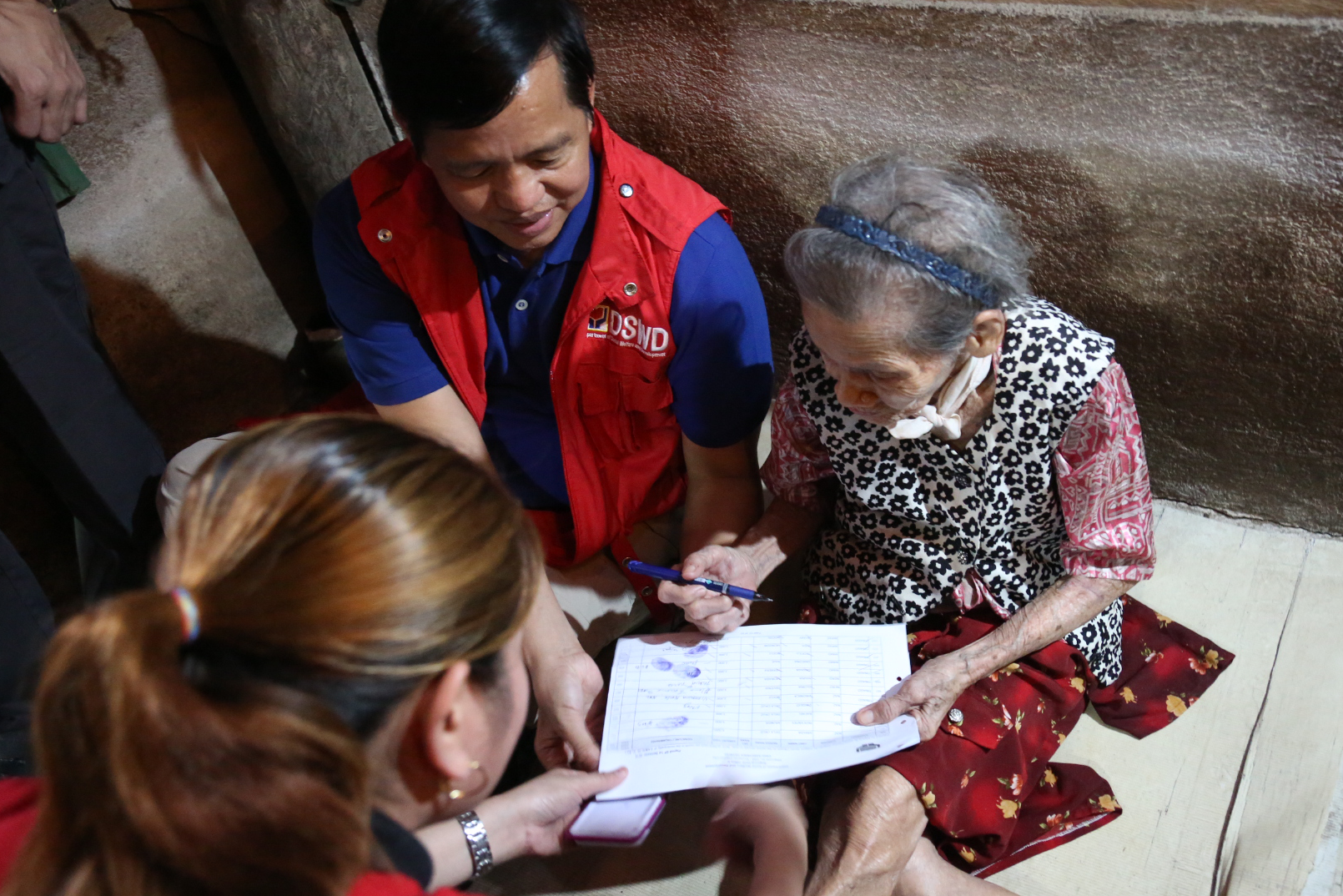 DSWD Sec. Rolando Bautista personally handed over the Social Pension stipend to one of the 705 beneficiaries in Camalig, Albay who are scheduled for the payout last Saturday (August 24, 2019). He went straight to the house of a 99-year old beneficiary who is frail to claim the grant from the designated venue.

Sec. Bautista also joined the DSWD Region V employees in the distribution of Social Pension stipend (January-June 2019) to 705 beneficiaries of twelve villages in Camalig, Albay last Saturday afternoon. He also went straight to the house of a 99-year-old senior citizen to personally handover the aid who was seen to be delighted of the official’s presence.

The whole team of Mayor Irwin Baldo received the DSWD key officials and other guests during the Social Pension payout. The LGU of Camalig provided a conducive venue for the payout, amenities and logistical support to conduct the DSWD payout.

For the remaining towns and cities, the beneficiaries and their families are advised to coordinate with their Office of the Senior Citizens Affairs (OSCA) or local social welfare and development office (LSWDO) for the payout schedule. DSWD Region V is closely coordinating with these offices for the Social Pension program.

For Social Pension beneficiaries who cannot personally claim during the scheduled payout, an authorized representative identified by the beneficiary and registered with DSWD FO shall be allowed to claim the stipend.

As indicated in the Expanded Senior Citizens Act of 2010 or RA 9994, the Social Pension for Indigent Senior Citizens is an additional government assistance which aims to: improve the condition of indigent senior citizens by augmenting their daily subsistence and medical needs; reduce incidence of hunger; and protect them from neglect. abuse, deprivation and natural and man-made disasters.

Pursuant to the eligibility criteria as may be determined by the DSWD, indigent senior citizens shall be entitled to a monthly stipend amounting to Five hundred pesos (Php 500) to augment their daily subsistence and other medical needs.

DSWD Bicol provides immediate assistance to the victims of fire in Ligao City and Polangui, Albay

Accidents happen when we least expect them, and fire accidents are among the most traumatizing especially when the damage is so severe that it cost you lives and properties. There is no better way to Read more…