Faces and Phases of Change

Published by Marygizelle Mesa on February 23, 2021 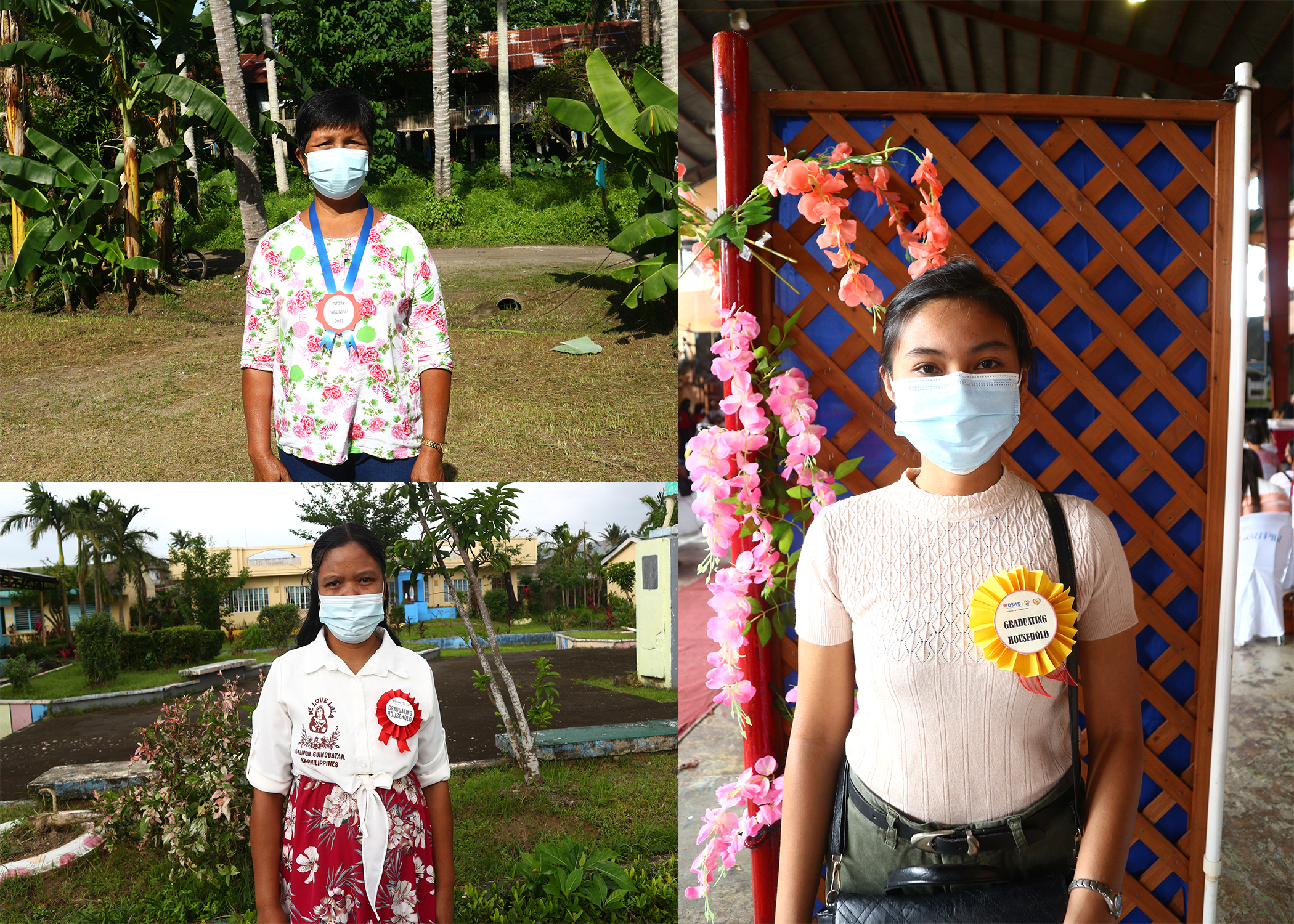 Camarines Sur – Faces of graduating households who shared testimonials of how the Pantawid Pamilyang Pilipino Program has changed their lives for the better during the conduct of Pugay Tagumpay 2021 (Top left – Honoria M. Dimaiwat from Iriga, Bottom left – Maria Cristina San Pascual from Buhi, and Right – Mary Ann Quingquing Ampongan from Pili)

Pugay Tagumpay 2021 is done to give commendation to household beneficiaries whose lives have improved through the Pantawid Pamillyang Pilipino Program (4Ps) with the assistance of partner stakeholders. The 4Ps beneficiary households were set for their program exit through transition and exit procedures and proper endorsement to the receiving Local Government Units (LGUs) for the implementation of the sustainability plan and post-service interventions and referrals. This is in line with the implementation of National Advisory Council (NAC) Resolution 2, series of 2020 – “Continuity of the cash grant provision to the 4Ps beneficiaries during the state of calamity due to COVID19 pandemic”, wherein client status 26 or households deferred exiting shall remain in the program until period 6 or until January 2021. As of 31 December 2020, a total of 56,095 households have exited the program.

Several testimonies on how the program helped improve them as a member of their family and communities were shared. Three stories of change encapsulated the thrust of the program to provide social assistance and social development to break the intergenerational cycle of poverty.

Mary Ann Quingquing Ampongan is one of the ESGP-PA student grantees. Her mother is a factory worker with three days a week schedule only. Her father is a tenant farmer who earns and harvests every after three months, depending on good weather conditions. She has three other siblings but with the meager income the household earns, Mary Ann decided to work as a cashier at a local store after she graduated high school to augment the growing needs of their family. Thankfully, she was chosen as one of the student-grantees of the ESGP-PA when her family was considered as 4Ps beneficiary in 2011. She was able to pursue higher education taking up BS Secondary Education and graduated in 2018. She currently works as a validator for Listahanan saying that she wants to give back to the agency that has helped her family.

Expanded Student’s Grants-in-Aid Program for Poverty Alleviation (ESGP-PA) is a scholarship grant to pursue higher education for poor families with child/children who must meet the following qualifications: identified 4Ps beneficiary, physically and mentally fit, high school graduate or equivalent, no other higher education scholarship/grant from public institutions, pass the entrance exam and academic requirements set by the State Universities and Colleges (SUCs), pass the requirements set by the National ESGP-PA Committee, and must enroll in Commission on Higher Education (ChED) priority programs.  A student-grantee is entitled to a maximum of Sixty Thousand Pesos (P60,000.00) per academic year which covers the cost of tuition and other school fees, academic and extra-curricular expenses, purchase of textbook, board and loading, transportation, clothing, medical needs and other valid related education expenses and support services to complete the degree program.

As a full-time mother of four, the income of the household was not sufficient. She earns by raising hogs and planting vegetables while her husband worked as a construction worker. Life became harder when her husband became a stroke patient and eventually fell into demise in 2014. Raising four children on her own was not an easy feat but with the help of the 4Ps program, Honoria Magistrado Dimaiwat can now proudly say that she has raised them right. She now has a daughter working as an Overseas Filipino worker (OFW), her second daughter is a public school teacher, and two more college students. She shares that through Family Development Sessions (FDS), she focused on teaching her children with good manners. In return, her children raised funds to build a bigger house for her, which becomes an evacuation site for their community during calamities.

Rising above the quagmire

Born from a poor household of Agta-Tabangnon tribe, Maria Cristina O. San Pascual has a merry gaiety in sharing her learning curves and triumphs in raising her family and pursuing higher education to influence her children, relatives and other community members to finish their studies. As a member of the Indigenous Peoples, she lacked access to basic education making her intimidated in facing other people.

The Family Development Sessions (FDS) changed her previous beliefs that she was stuck uneducated and poor. She graduated secondary education through the Alternative Learning System (ALS) in 2018 and is currently a second year college student. She has two children who are senior high graduates and will be pursuing tertiary education in their hometown in Buhi, Camarines Sur. She also became a parent-leader from 2014 to 2020. Grateful to the 4Ps program, she now proudly shares that they were able to save enough money to buy a bangka which helps harvesting the tilapia in their fishery efficiently. She was also able to engage and earn in an income generating project through the Sustainable Livelihood Program (SLP) – she manages a bigasang bayan since 2015.

The Pantawid Pamilyang Pilipino Program is a national poverty reduction strategy and a human capital investment program that provides conditional cash transfer to poor households to improve their health, nutrition and education.

Different stories of success – all in gratitude of the 4Ps program that paved way to improve their lives and break the inter-generational cycle they were trapped in.