Filling the void with a new family

Published by Jesseshan Marbella on March 6, 2019 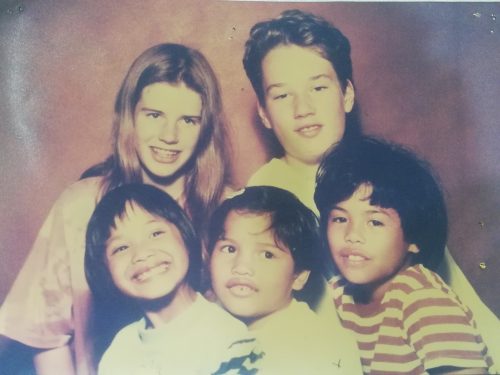 Katarina Machtemes (lower, center), a Filipina, now living in Germany as a phramacy aide. She was one of the children placed for adoption in 1995 by DSWD from its Reception and Study Center (RSCC).

Katarina Machtemes found the cure to fill the gaps in her life. But she endured the wounds that molded her today.

One of the punitive moments for her was when she was abandoned by her mother in 1994 who left her at a DSWD office in Daet, Camarines Norte. Katarina, who was four at that time, was then brought to DSWD Reception and Study Center (RSCC) in Legazpi City that gave her the temporary care.

In this difficult time, she slowly recovered from the distress because of the people who showed love and compassion.

According to Katarina, the social workers at RSCC described her as a cheerful child who wants to be cuddled all the time. Their arms served as a refuge to a lost child that longed for a family.

After a year of staying in the Center, Katarina was blessed with a family who gave her not only a permanent home but unconditional love. Through intercountry adoption, she met and lived with them in Germany.

“Though I’m not the only child in the family, I experienced being loved and accepted wholeheartedly,” she said.

Katarina also said that she did not feel any hint of pity being an adopted child because her new family nurtured and helped her reach her dreams. Her siblings were ready to help and support her aspirations.

“I never felt scared or doubted my capacity,” she added.

Moreover, she took Bachelor of Science in Pharmacy and currently working as a pharmacy aide at one of the drugstores in Germany.

Katarina thought things are working well for her, however, her adoptive parents struggled with their marriage that led to their separation.

Her siblings got their own families as well that incited for Katarina to look for her biological parents in the Philippines.

“I felt the desire to look and meet my family in the Philippines when I started to feel that there’s something missing,” she said.

She started to ask questions like what does her family looks like; are they still looking and thinking of her; what’s their condition now.

Her boyfriend arranged her motherland tour in 2016. Finally, she was able to fly to the Philippines.

Katarina felt a sense of belongingness and extreme joy when she saw her fellow countrymen.

Her adoptive brother who is also a Filipino accompanied her to meet and look for her family.

She met her relatives but not her biological mother. However, she was happy to hear stories about her as a child and her mom.

“For unknown reason, I felt relieved on what I heard from them. I am hopeful to meet my biological mom the very soon I get back again to the Philippines,” Katarina said.

Moreover, she was grateful to meet the people behind RSCC who introduced her to the life she has now.

“They were adorable, accommodating and approachable. They assisted me all throughout my motherland tour and made it a successful one,” she said.

Katarina was more than thankful that she was one of those children placed under the care of the center rather than living on the streets with full of uncertainties.

Despite of the doubt and all the wounds she withstood through time, Katarina was able to find the cure in her emptiness.

“I am more than complete and would always want to thank all the people who helped me to grow into an independent person,” she said.