Published by Marygizelle Mesa on April 27, 2021 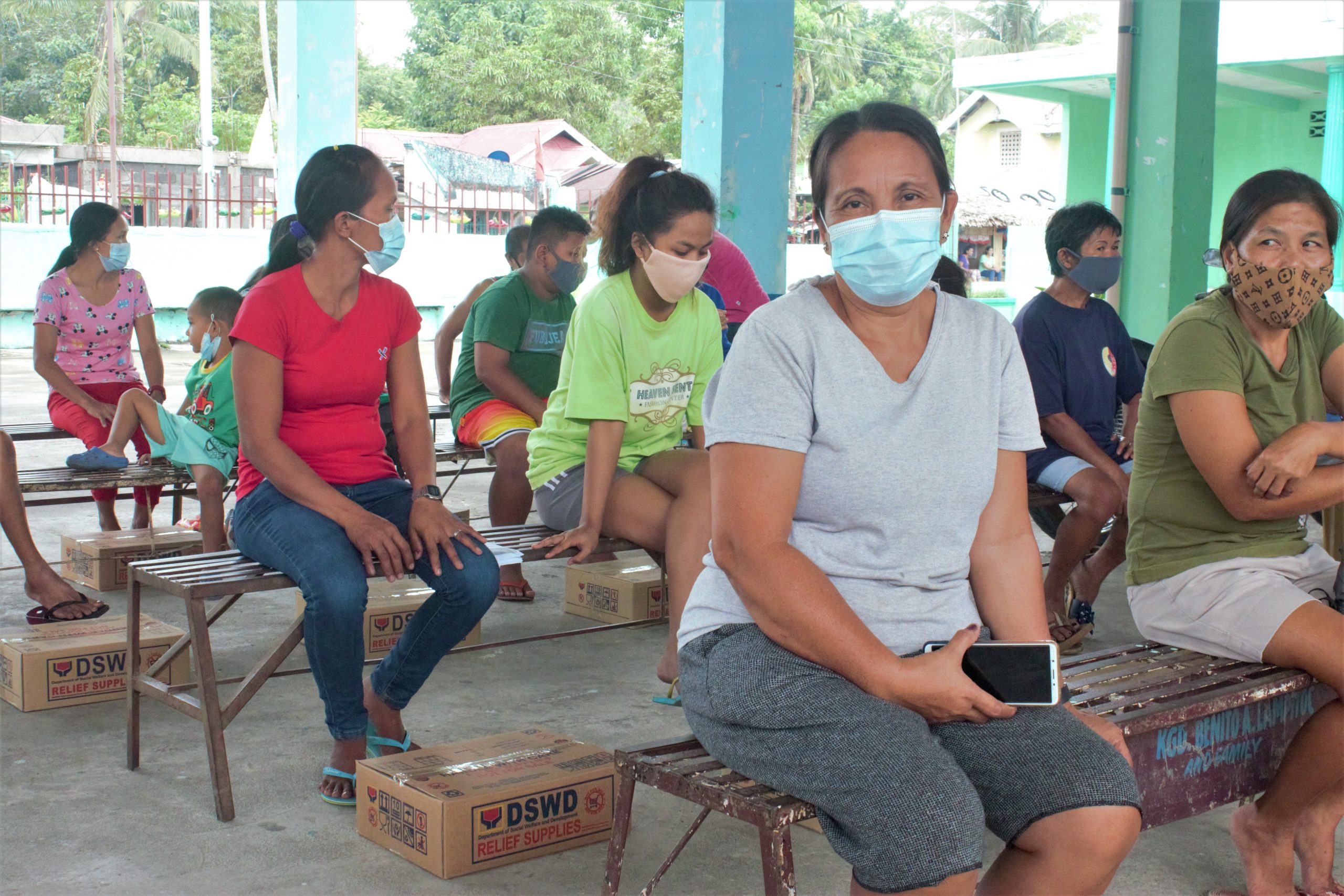 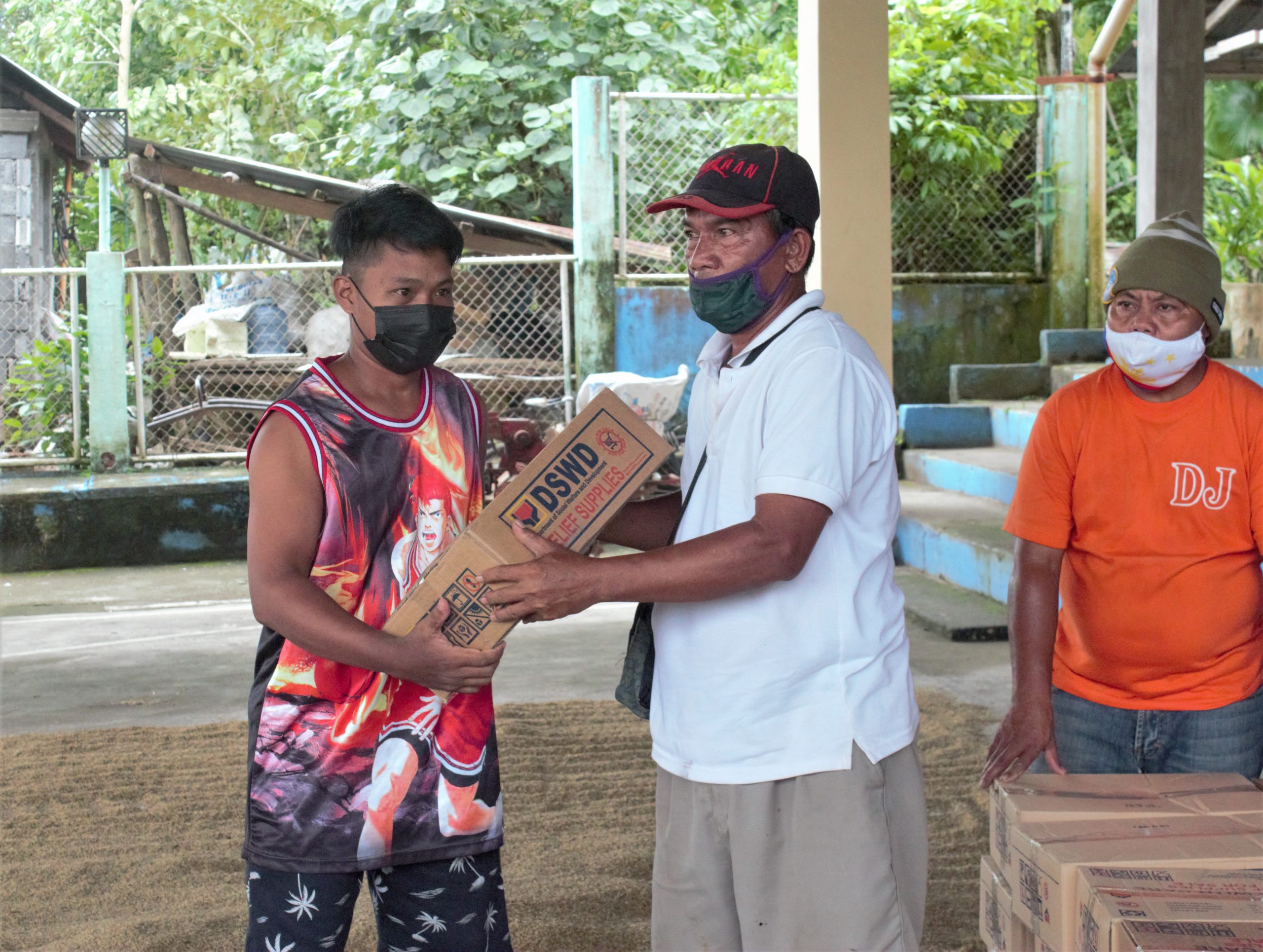 Albay – Four hundred twelve Family Food Packs (FFPs) were distributed to families residing in flood-affected barangays in the municipality of Libon, Albay in response to the town’s request for augmentation. The food packs distributed in Libon amounted PhP 169,476.20 based on the Disaster Response Operations Management Information Center (DROMIC) report.

The town conducted pre-emptive evacuation in flood and landslide prone barangays last April 18, 2021, in preparation for typhoon Bising. During disasters, farmers and fisherfolks whose livelihood depend solely on agriculture are the most affected.

Mrs. Brigida Ortega, one of the evacuees in Buga, a lakeside barangay, said that her family opted to evacuate due to the fear of having their house destroyed by the typhoon. Her family was one of the beneficiaries of Family Food Packs as relief augmentation to evacuees in Libon. According to her, she was not expecting to receive food assistance since the typhoon did not make landfall in their area. However, Mrs. Ortega was still thankful that she received the aid.

Barangay Burabod has been identified as highly susceptible to landslide.  Mr. Jessie Marinay’s family was among the 65 families who evacuated. According to him, his house, mainly composed of light materials, have been damaged by typhoon thrice. Mr. Marinay extended his gratitude to the agency in interview. He said, “dakolong pasalamat sa tabang alin DSWD para samon na mga kasaradayan” (big thanks to DSWD for the assistance given to ordinary residents like us).  Mr. Marinay, like most farmers in Libon, do not own a farmland.

Mrs. Judith Sawali, another evacuee from Burabod expressed her gratitude to DSWD after receiving a food pack. According to her, the food pack will be of great help for her family especially that her husband has been incapable of harvesting rice due to the unfavorable weather.

Despite the inconvenience of pre-emptive evacuation, residents of Libon still opt to evacuate from high-risk areas as severe flooding incidents have been observed in the recent years.

Dubbed as the rice granary of Albay, Libon is home to thousand rice farmers and crop producers. Ironically, the town is also considered as Albay’s catch basin. Based on the data released by the Department of Environment and Natural Resources-Mines and Geoscience Bureau (DENR-MGB), out of 47 barangays in Libon, 27 have been identified as flood susceptible while 30 barangays have been considered susceptible to landslide. During typhoon season, upland barangays become susceptible to strong wind and the coastal area to storm surge and flashflood. Liquefaction has also been observed in the Poblacion area thus, exacerbating flood occurrence.

Last year, Libon recorded a total of 2,746 hectares of damaged rice field due to super typhoon Rolly. Fortunately, typhoon Bising did not hit land mass while traversing northwestward of the archipelago.

The Department of Social Welfare and Development, as the vice-chair in disaster response, leads in providing social services to disaster-stricken communities across the Bicol Region through the Disaster Response Management Division (DRMD). It should be noted that based on Republic Act 10121 or the Disaster Risk Reduction and Management Act of 2010, during disaster occurrence, the Local Government Units should be the first to respond to the needs of its constituents. However, should LGUs request for augmentation, the agency will provide.

Aside from food items, the agency also provides non-food items such as hygiene kit, family kit, kitchen kit, sleeping kit as well as laminated sacks to families with damaged houses. Moreover, psychological intervention is also provided by the agency to survivors to help them cope with the traumatic effects of disasters.

Read the various stories of communities and personal development of the Bicolanos and the role of KALAHI-CIDSS in sparking “burunyog” or unity in the communities. Download this compendium through the link provided below: Burunyog Volume Read more…

Casim’s walk from dreams to reality

Leaving a place you’ve lived for years is a very hard decision to make especially when you have to move back to your hometown and start from scratch. For Rowena Casim, 42, and her husband, Read more…

At a young age, we were taught how to sew using basic hand stitches with a needle, thread, and piece of fabric as a basic life skill. Beyond the stitches and patches we create when Read more…