The Untold Stories of a Centenarian

Published by Marygizelle Mesa on December 13, 2021 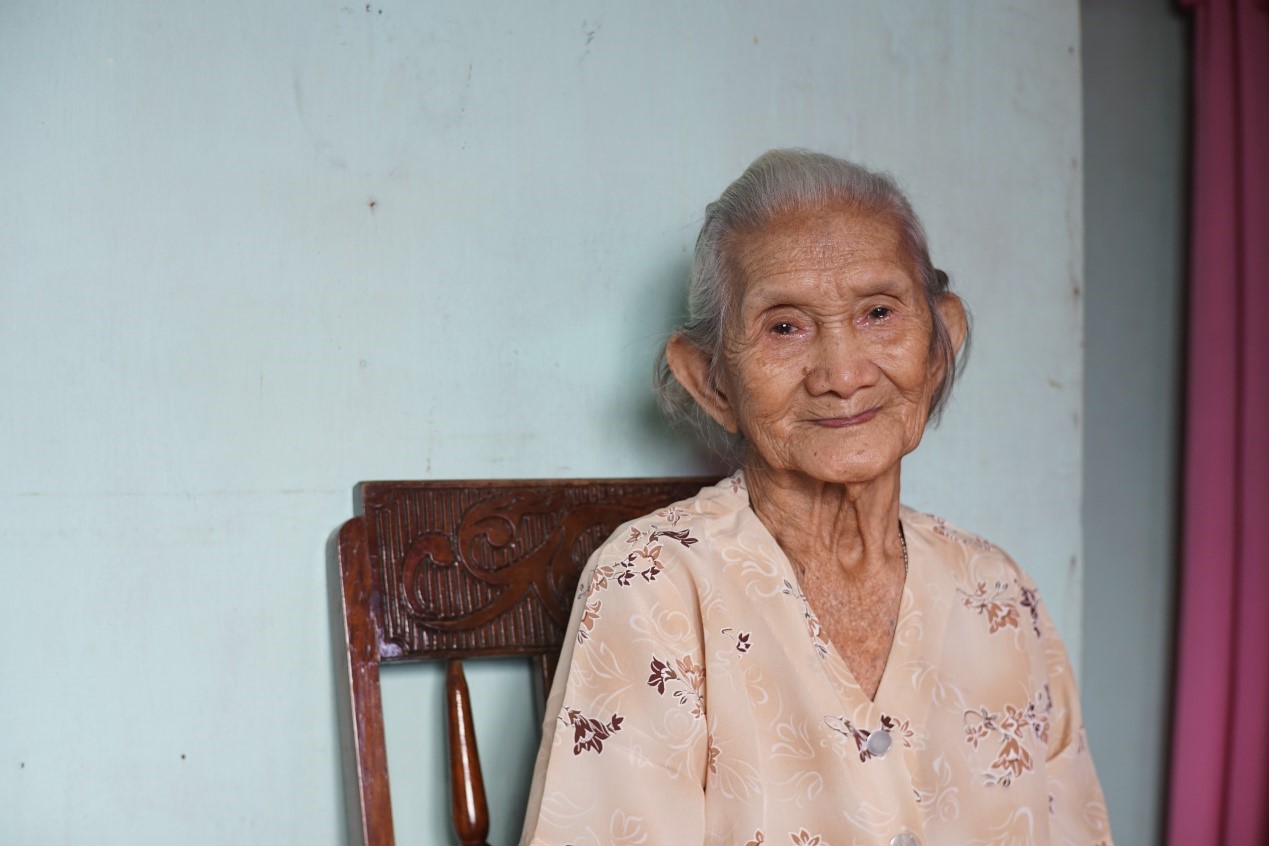 A centenarian from Brgy. Bogñabong, Tabaco City shares her smile and her stories about the secret to having a long life.

Much has been said about how to live longer. But 100-year old Fidela Bondoy, or May Fidela as she is fondly called by her neighbors and kin only have three secrets: eating vegetables, drinking tea and a fervent prayer.

She was born on April 24, 1921 – a living witness to the ugly aftermaths of the World War II and the Martial Law in the Philippines.

May Fidela and her husband were blessed with eight children and 93 grandchildren. She is being looked after by her two daughters who are both widows.

Despite her age, she is still very eager, active and conversational. She immediately got up and peeked from her door when some DSWD personnel came to visit her humble home in Brgy. Bogñabong, Tabaco City.

According to her daughter, Esperanza, the cash award that was awarded her mother last July, 2021 was kept safely in a bank.

“Binawasan ko lang pambili ng gatas at pagkain ko. Tapos yung tira ipinalagay ko sa bangko para madagdagan. (I deducted some amount from my cash gift for my food and milk. The rest of it, I have kept in a bank) May Fidela shared.

Esperanza further disclosed that they have reserved the remaining amount for her mother’s final expense insurance plan as well.

Lola Fidela got married to Rufino, Bondoy when she was only 18 years old while the latter was 21. She recounted that their life together was filled with trials. Having no education, she weaved mats, fans and cooked delicacies which were their source of income. Lolo Rufino on the other hand, had his own scissors shop or ‘pagawaan ng gunting.’

When asked about how they have surpassed all the struggles they’ve been through, May Fidela couldn’t help her tears. She said that it’s all because of the Lord’s mercy and faithfulness.

Lolo Rufino passed away at the age of 87. Lola Fidela still lives in their house that is older than her.

Lola Fidela said that she had no siblings and she had always dreamt of having one. Her daughter, Fe, said that their May Fidela adopted eight relatives until she reached the age of 80.

When asked to give her advice to the younger generations, she quickly answered, “Wag ka-kalimutang manalangin” (Don’t forget to pray).

Since 2016, 257 centenarians in Bicol Region have received government recognition and incentives.

The region covers all the provinces of the Bicol Region, namely: Albay, Camarines Sur, Camarines Norte, Sorsogon, Masbate and Catanduanes.

Centenarians rich and poor are entitled to receive a Php100,000 “centenarian gift” among other incentives, as well as recognition from the government for reaching 100 years of existence.

Under RA 10868, all Filipinos who live up to 100 years, otherwise known as Centenarians, will also receive a Letter of Felicitation from the President whether he or she is in the Philippines or not. ###